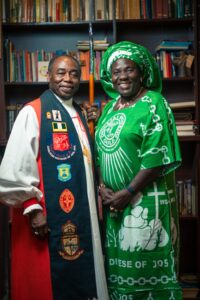 Today, The Most Rev. Dr Benjamin and Dr Mrs Gloria Kwashi are marking 30 years of their consecration, as the Bishop of the Anglican Diocese of Jos.
The Most Rev. Dr Benjamin Argak Kwashi was ordained in 1982 and 10 years later became the third Bishop of Jos, thus becoming the youngest person to be so consecrated then in the Church of Nigeria.
In January 2008, he was presented as the Archbishop of Jos Province in the Church of Nigeria. His pastoral experience is wide and varied; he has worked in rural and urban churches, as well as the Rector of a theological college. Kwashi has held many positions on boards and trusts, both within Nigeria and internationally; he is the immediate past international board chairman of Sharing of Ministries Abroad (SOMA).
In 2003, he was conferred with the national honour of Officer of the Order of the Niger (OON). He and his wife, Gloria, live in Jos. Their marriage is blessed with six children. They also have about 74 orphans living with them in their home and a further 430 whom they train and feed in their own school, Zambiri for FREE!
Kwashi is engaged in mediation and peacebuilding in the Middle Belt, a region that has been marked by ethnic and religious tensions.
In 2019, Archbishop Benjamin Kwashi was diagnosed with a stage 4 cancer of the colon and liver and was not expected to live beyond 3 months but in a miraculous manifestations of God’s power beyond comprehension of the medical world, he is now cancer-free.
He is currently the General Secretary of The Global Anglicans (GAFCON), a position that was held by Archbishop Peter Jensen, former Archbishop of Sydney; while his wife, Gloria Coordinates the GAFCON women Network.
Today, we celebrate this gift to humanity, who has been described as one of the most influential Christians alive, a wealth of knowledge, a Bible teacher, and a selfless and generous couple, kept by grace for the praise of He who has called them to service.